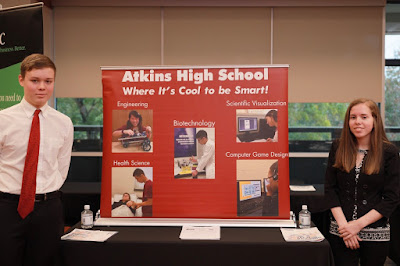 This comes us from Atkins HS News:

Each year now for 17 years, the Winston-Salem Chamber has hosted a Tech Briefing to highlight the latest technology and innovations from the area, including research facilities, companies, and medical facilites. You scan the list of presenters at the Annual Tech Briefing and see: CEO, President, Professor, VP, Software Engineer, Medical Director, Founder, then see ... Student? Yes, student. On November 14, 2018, among the prestigious presenters list of company founders, leaders, and inventors--were two Atkins HS students, Aaron Petty and Brianna Thompson.

Last year, Allison Charles and Matthew Shealy led the way by being among the three high school students who have ever presented at the conference, with Charles presenting on a gene cloning teaching method and Shealy discussing the developing project of the Atkins Alternative Fuels Team.

“It is great to see that Aaron and Bri can hold their own among presentations given by CEOs and doctorates,” said Atkins teacher Terry Howerton. “It says a lot about the quality of students that we have here at Atkins. I know that everyone was very impressed.”

Thompson won third place at the TSA national conference in the Biotechnology Design category for her project. Her proposal was to create an edible vaccine by using freeze-dried banana pudding as a vector for vaccines sent to underdeveloped countries. Its sweet taste would increase the chance of it being taken and the freeze dried component would eliminate the need for refrigeration in these countries.
“$20 million are wasted annually from poor refrigeration of vaccines,” Thompson said. She is now working on the proof of concept, which would allow for the proper storage of the vaccine, and create a product that people will want to eat but still be healthy.
Petty is a senior biotech major at Atkins who did his summer internship in the Chemistry Department at Wake Forest University. One project involved developing an alternative assay that would eliminate the need for radioactivity when studying aminoacyltransferase. His second project was to optimize a teaching kit that used a biofilm to teach microevolution.

Petty said, “Innovation in Winston is happening in research with university and companies. It’s a great place to be. The opportunity is there and it’s important to take advantage of it.” Petty said his presentation was well received but difficult to manage such a technical topic to an audience of mainly business people.
Other presenters at the Tech Briefing included representatives from inmar, Opinshop LLC, Fluree, Winston-Salem State University, Intuality Inc., Plakous Therapeutics Inc., Forsyth Tech, Looking Glass Services Inc., and the UNC School of the Arts.

As a STEM magnet school, Atkins HS offers one of the few programs in Biotechnology available to high school students.

For this and other news from Atkins Academic and Technology High School, go to Atkins

Winston-Salem/Forsyth County Schools
We're here to share good news about people associated with Winston-Salem/Forsyth County Schools, to answer questions and to let you share your thoughts about how to make the schools better. If you have something that you would like for others to know about or want to ask a question, please send an email to Kim Underwood